A study suggests that women with insufficient levels of vitamin D in their blood may be more likely to experience pre-eclampsia during pregnancy. 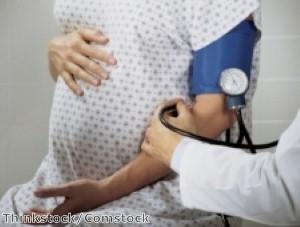 Women with a deficiency in vitamin D - the so-called 'sunshine vitamin' - may have an increased risk of the pregnancy complication pre-eclampsia, new study has found.

Pre-eclampsia is characterised by high blood pressure, fluid retention and protein in the urine and can lead to serious complications for both mother and unborn baby if left untreated.

Researchers at the Isfahan University of Medical Sciences in Iran conducted a review of existing research on the vitamin's role in pre-eclampsia risk, after observing that the conclusions of previous studies had been inconsistent.

They therefore attempted to combine and summarise information on the possible links between the levels of vitamin D in women's blood and their risk of the pregnancy complication.

A total of 15 relevant articles were identified, all of which had looked at the links between maternal vitamin D levels and pre-eclampsia risk.

Eight of these were used to perform a meta-analysis, in which the data from the individual studies were combined to provide one large dataset.

The researchers found an overall link between vitamin D deficiency and the risk of pre-eclampsia.

Publishing their findings in the Journal of Clinical Endocrinology & Metabolism, the study authors concluded: "There was a significant relationship between vitamin D deficiency and increased risk of pre-eclampsia. Further studies are required, particularly in developing countries."

This is not the first study to link vitamin D deficiency with pregnancy-related problems, as earlier research - conducted by scientists at Canada's University of Calgary and published in the British Medical Journal - found that mothers-to-be with low levels of the vitamin were more likely to develop gestational diabetes and to give birth to small babies.

Vitamin D is widely regarded as a very important nutrient for a number of bodily processes, yet many people have inadequate levels as our skin needs to be exposed to sunlight regularly in order for the vitamin to be manufactured inside the body.

Unlike many other vitamin D supplements, it is naturally sourced and free from toxins thanks to a special process that extracts the vitamin from sheep's wool using methanol, rather than hexane.

This means it is free from potentially toxic chemicals that are often left behind during hexane extraction processes.