A study suggests that ingredients in the curry spice turmeric may help to support liver function. 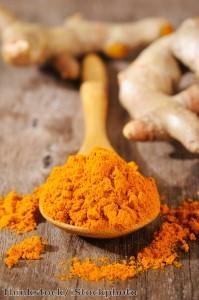 Substances in turmeric - a spice grown in India and commonly used for flavour and colour in curries - may help to support and improve liver function, a study has found.

Scientists at Chonbuk National University Hospital in South Korea recruited 60 people, aged 20 and over, for a randomised placebo-controlled trial to examine the effects of fermented turmeric powder on liver function.

All of the patients had been diagnosed with mild to moderately raised levels of alanine transaminase (ALT), a liver enzyme that is often used as a marker of liver function, with increased levels in the blood indicating the presence of liver damage.

Their levels of this enzyme ranged between 40 IU/L and 200 IU/L.

Participants were given 3g per day of either fermented turmeric powder or a placebo (dummy supplement) to take after meals for 12 weeks.

Among the 48 volunteers who completed the trial with sufficient data, those who used fermented turmeric powder showed a greater reduction in ALT levels than those taking the placebo.

Turmeric users also showed significant decreases in levels of aspartate aminotransferase (AST) - another marker of liver function - and slight reductions in levels of gamma-glutamyl transferase (GGT), which is elevated in some liver diseases.

The extract did not seem to cause any severe side-effects, indicating that people can use it without any fears for their health.

Publishing their findings in the journal BMC Complementary & Alternative Medicine, the study authors concluded: "The data of this trial indicate that fermented turmeric powder is effective and safe, generally well-tolerated without severe adverse events, in the treatment of subjects with elevated ALT levels over a 12-week period."

The findings suggest that people with concerns about their liver health may want to seek out a high-quality turmeric supplement, such as Really Healthy's AlphaCurcumin Curcumin Complex.

AlphaCurcumin is a highly potent supplement containing 95 per cent curcuminoids, the active extract in turmeric.

One of the problems with those marketing curcumin - and indeed with many curcumin supplements - is that they are often sold with the claim of being ten or more times stronger than standard curcumins. Close scrutiny can show that often this is not the case.

AlphaCurcumin certainly is derived from an outstanding source of patented raw material that truly is 6.75 times more potent than any other curcumin on the market and, thanks to the addition of quercetin, bromelain and bioperine (black pepper extract) for higher absorption, Really Healthy ensures that users get more benefit than they would from the vast majority of other curcumin supplements on the market.