A WHO review has highlighted the burden of disease from air pollution in the EU. 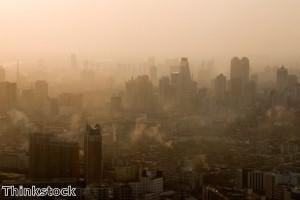 Long-term exposure to tiny particles in polluted air can trigger a range of health problems, including atherosclerosis, adverse birth outcomes and respiratory diseases, a study has shown.

Leading academics from around the world conducted the World Health Organisation (WHO) review on behalf of the European Commission in order to inform air policy across the bloc.

Zsuzsanna Jakab, WHO's regional director for Europe, said: "Years of WHO-coordinated research have provided the first quantitative estimates of the burden of disease from particulate matter and have now established links between air pollutants and health outcomes."

Research shows that over four-fifths of Europeans are exposed to particulate matter (PM) levels above the 2005 WHO Air Quality Guidelines, depriving the average citizen of 8.6 months of life.

PM mainly comes from household heating, industrial activities and traffic and has been linked to respiratory problems, cardiovascular diseases and lung cancer.

The WHO review found that long-term exposure to ozone (O3) increases the risk of respiratory disease, as well as raising the risk of dying among people with chronic conditions.

Studies show that exposure to nitrogen dioxide (NO2 - a toxic gas produced by vehicle engines and power generation) may increase the overall risk of death, hospitalisation and respiratory symptoms, even at levels under the current EU limits for the gas.

There is also evidence that air pollution may harm cognitive function and increase the risk of diabetes.

In light of the findings, experts have recommended changes to EU law to improve air quality and protect people's health.

Janez Potocnik, EU commissioner for the environment, said that the links found between air pollution and human health "reinforce the case for an ambitious new policy".

The findings also highlight the importance of employing natural means to protect and bolster our immune system against this onslaught of chemicals.

For instance, people living in highly polluted areas may want to take a dedicated detox supplement to help detoxify their body and boost their immune function.

AlphaClear, supplied by The Really Healthy Company, is a new detox supplement that contains a volcanic detox mineral called zeolite.

This naturally occurring mineral compound has long been included in traditional Asian remedies and is also used by the pharmaceutical industry to absorb heavy metals and toxins.

Formed over millions of years by the crystallisation of volcanic ash, it was even used to mop up radioactive elements after the Chernobyl disaster thanks to its unique and powerful ability to trap toxins.

While it is difficult to avoid environmental pollutants altogether, a high-quality detox supplement such as AlphaClear can help the body to combat their effects.