Chickens that are not certified as organic may expose consumers to potentially harmful arsenic. 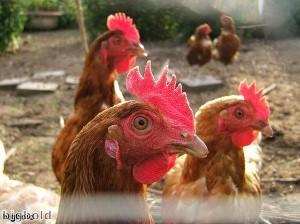 People who choose to eat meat and do not opt for organic produce may be exposing themselves to the environmental contaminant arsenic, new research suggests.

Scientists at the Johns Hopkins Bloomberg School of Public Health in the US carried out tests on chicken meat to see whether it contained traces of arsenic.

They analysed 116 samples of raw chicken and 142 cooked samples after collecting a range of conventional, antibiotic-free and organic poultry meats from grocery stores across ten metropolitan areas of the US between December 2010 and June 2011.

Arsenic species were determined in 65 raw and 78 cooked chicken samples.

Among the cooked samples, concentrations of inorganic arsenic were higher in those taken from conventionally reared chickens than in those from antibiotic-free or organic samples.

Roxarsone - an arsenic-based drug used widely in poultry farming - was detected in half of the conventional samples and one of the 13 supposedly antibiotic-free ones.

None of the 25 organic chicken samples contained any traces of Roxarsone.

Publishing their findings in the journal Environmental Health Perspectives, the study authors calculated that people who eat conventional chicken meat would consume an extra 0.11 micrograms per day of inorganic arsenic, compared with those who choose organic chicken.

Since exposure to inorganic arsenic is known to increase the risk of cancer, the findings suggest that standard lifetime exposure through consumption of conventional chicken meat could result in 3.7 extra cases of bladder and lung cancer per 100,000 people.

"Cessation of arsenical drug use could reduce exposure and the burden of arsenic-related disease in chicken consumers."

The findings may encourage some meat-eaters to switch to organically reared chickens or to consider a natural solution to help remove arsenic and other contaminants from their body, such as AlphaClear.

Thanks to its unique honeycomb structure, zeolite is able to absorb heavy metals and other toxins, making it a common ingredient in ancient Asian remedies as well as giving it important uses in the pharmaceutical industry.

By adding a few drops of AlphaClear to drinking water each day, people can help to remove toxins such as arsenic from their bodies and improve their chances of remaining in good health.