A new study has revealed that women who have problems breastfeeding their first-born are more likely to give up trying. 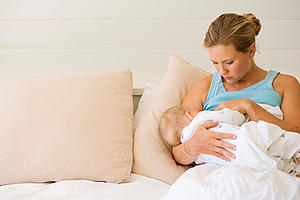 Many mothers may find they experience all sorts of problems when it comes to breastfeeding their babies - for example, sore nipples, trouble getting their baby to latch on, difficulties producing enough milk, and so on.

However, new research has shown that not only is the problem extremely common among first-time mums, but it also makes these women almost ten times more likely to abandon the practice.

Published online in the journal Pediatrics, the findings from Cincinnati Children's Hospital Medical Center in the US will no doubt serve as a comfort for those who feel they are the only ones finding what many may wrongly think is a simple, biological process a little difficult.

Sometimes, it may be a case of the mother just making a small adjustment to how they are breastfeeding and the problem could be resolved. For example, if sore nipples are an issue, putting up with the pain could actually only end up making things worse. Stopping using perfumed soap on the breasts, changing breast pads frequently and wearing natural cotton underwear could all help.

That said, sometimes it may seem that breastfeeding is causing too much of an issue and this is why many mothers may decide to leave it altogether - even though the problem is far more common than many women may realise.

According to the results, 92 per cent of new mothers in the US had problems with breastfeeding within just three days of delivering their first born. Over half (52 per cent) of these individuals struggled to get their new baby to latch on to their breast to feed, while almost half (44 per cent) deemed the practice painful and 40 per cent found it hard to produce enough milk for their child.

Laurie Nommsen-Rivers, a researcher in the Perinatal Institute at the centre and lead study investigator, reassured the mums in question, saying: "Breastfeeding problems were a nearly universal experience in the group of first-time mothers in our study, with some of the most common problems also being the most strongly associated with stopping breastfeeding."

The expert championed support programmes for mums for whom such concerns are an issue, especially during the first week or so after they are discharged with their bundle of joy.

New mums might be concerned about how breastfeeding may affect their own overall health. In actual fact, it can be just as beneficial for the mum as it can her newborn child. It lowers a mother's risk of developing breast or ovarian cancer, uses up to as many as 500 calories a day, saves money that would otherwise be spent on formula and sterilising equipment and, furthermore, it can help mother and baby to bond.

Furthermore, recent research published in the Journal of Clinical Nursing suggested that breastfeeding for more than six months may protect mothers who do not smoke against breast cancer.

However, some women may want to ensure they are giving their bodies the best chance of keeping fighting fit and replenished with all the right vitamins and minerals while they are breastfeeding.

A health supplement such as KBG Algae - available from the Really Healthy Company - could be ideal as it is one of the richest nutrient complexes on the healthfood market at the moment. Interestingly, it is also the only known food to contain the same spectrum of activated essential fatty acids as breast milk, making it a great all-round complex to support those vital building blocks of life.