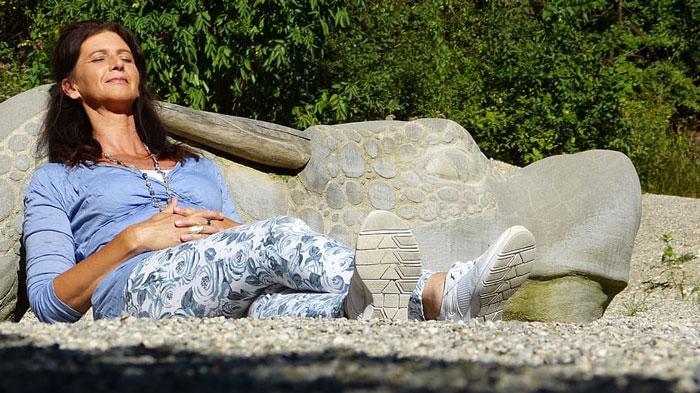 Menopause is a natural stage every woman reaches in the prime of her life. A drop in circulating hormones coincides with the moment when the body is no longer expected to produce offspring, and so noticeable symptoms may start to appear.

Despite menopause being popularly regarded as a loathsome phase in a woman’s life, it should not be feared because it is actually ushering in a new wave of freedom.

There are ways to mitigate the more negative effects by reducing stress as much as possible. Research has shown that anxiety and chronic stress can potentially aggravate the symptoms of menopause, as it would for any health condition, by affecting the HPA axis (the stress response system in the body). The HPA axis is regulated by the sympathetic nervous system and is activated whenever the body senses danger (real or not).

The brain sends signals to the adrenal glands to produce cortisol, the stress hormone, and by doing so affects every single system in the body. For example, digestion and the immune system may be suppressed to preserve energy (preparing for ‘fight’ or ‘flight’), and so, symptoms may be linked to stress activation rather than to the menopause itself. Because cortisol is also a dominant hormone, it can deregulate the fragile balance of other hormones, including oestrogens and insulin. It is therefore important to reset the stress response by reframing how we regard menopause in order to reduce the severity of the stress-induced symptoms.

Menopause is not a health condition

Modern medicine is about quick fixes, neglecting the rhythms of nature. We have lost our sense of purpose and look at life passages as inconveniences rather than natural stages, and often take medication after medication in order to carry on, because we are led to believe that this is the way to do things when we reach menopause.

For centuries, menopause was regarded as a period in life associated with wisdom and power, and so it was never resisted but actually welcomed. Today, however, we have lost our connections to nature and our appreciations for the natural rhythms of life. Being old is associated with frailty and medication. Indeed, the average person over the age of 65 is on 5 prescription drugs daily.

Researcher Carol Brayne said: “we know that polypharmacy is associated with higher mortality and that the evidence for combination therapies on the scale that we have seen in the older population is not good.”

Maher et al (2013. p. 57) echoes this: “Nearly 50% of older adults take one or more medications that are not medically necessary. Research has clearly established a strong relationship between polypharmacy and negative clinical consequences.”

More concerning, a recent cohort study, which included over 15,000 older adults, revealed an association between loneliness and polypharmacy (the simultaneous use of multiple drugs to ‘treat’ a single condition).

We need a complete re-think how we view the latter stages of life. And, we need to re-think menopause.

Due to the significant decrease in oestrogen and progesterone, sex hormones that have an incidental anti-inflammatory activity, women must ensure they take the appropriate steps to reduce the symptoms associated with the sharp decrease in hormone levels and the potential rise in inflammation.

This rise in inflammation during Menopause can also lead to other problems: an increase in the risk of cardiovascular disease, an increase in osteoporosis (on average, women may lose up to 10% of their total bone mass which can double with bad diet and lifestyle, as well as genetics), and weight gain (due to sleep disturbances, stress and a slower metabolism).

One of the best ways to reduce this sort of inflammation is to modify the diet, which is key to restoring balance and supplying the body (and the brain) with the essential nutrients needed to function optimally. An optimum diet reduces the severity of both psychological and physical menopausal symptoms, and should ideally contain a large variety of antioxidant-rich, anti-inflammatory foods. Recent studies have shown that certain food supplements work synergistically on various levels on the body, not just the hormone levels.

Klamath algae can therefore help overcome many of the menopausal symptoms, including stress-associated inflammation, mood swings and depression.,

The recommended dose for Klamath Blue Green Algae is 1 gram 4 times a day, starting with a low dose and build up to the maximum dosage.

Lifestyle is another important factor and weight-bearing exercises are essential to preserving bone mass.