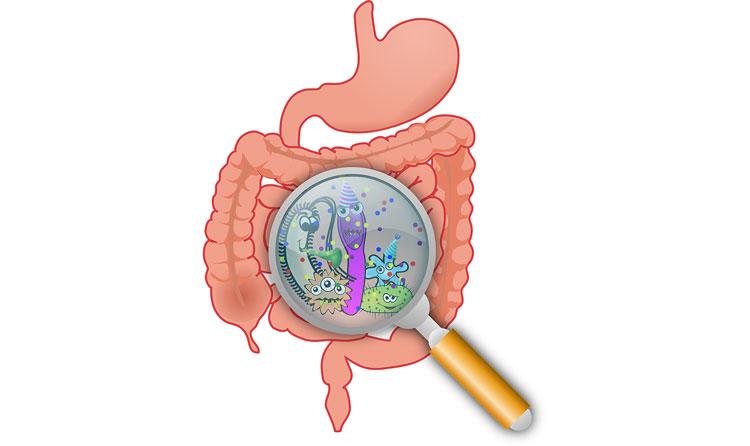 The gut is the interior part of the body that spans from the mouth, all the way through the oesophagus, into the digestive tract, through the small intestine, then the large intestine, all the way to the colon. Every part of this amazing system is lined with bacteria and lymphatic tissue. It is estimated that 70% of our immune response resides in our gut.

It is thought that the reason this part of the body is so overabundant in immune tissue and bacteria because it is the main entry and exit point of the body. Toxins and poisons throughout human evolution are most likely to enter the body via eating and drinking.

Today, there is a huge investment in research in a bid to identify and understand this close relationship between bacteria and the health of the host. Approximately 100 trillion microorganisms made primarily bacteria but also viruses, fungi and protozoa life in the human gut.  Researchers have identified correlations between low bacterial diversity and chronic diseases such as Diabetes Type I and II, chrons diseases, chronic fatigue, obesity and eczema.

Gut bacteria is also responsible for vital nutrient assimilation and even production. Nutrients such as Vitamin K and B12 are synthesized by bacteria that are living in our gut.  Further investigations into the role of gut bacteria in health and disease have identified that bacteria also influence the host’s immune response. Strains of bacteria that inhabit the mucosa of the gut wall in mouse models appear to influence the activity of key immune cells such as T-cells.  With 100 trillion organisms to map and isolate, research is a long way from mapping bacterial populations and their every interaction with the human host: but one thing we can be certain of is that gut bacteria plays an essential role in our overall health, and this gut population begins right from the moment that we are born.

Researchers are now confident that there is such a thing as ‘beneficial bacteria’, bacteria that actively contribute toward the health of the host. There is also ‘pathogenic bacteria’ – bacteria that promote inflammation and disease. There is also symbiotic bacteria, bacteria that are useful for overall health but require enough of a different population of bacteria to manage the population.  In the pre industrialisation period, there were few things that would threaten the internal ecosystem of the human gut, as normal life would have consisted of gut bacteria friendly diet and lifestyle. Before the advent of industrialisation humans would have grown their own produce, and if they could not: would eat purchase seasonal, local and organic produce. Such foods would naturally be teeming with beneficial bacteria that occurred naturally in the microbiome of the soil, passed onto the food and consumed by humans. Diet would have been very varied, due to changes in seasons and how those seasons would affect the growth or produce. In modern society, the use of pesticides, herbicides, chemical and factory production, as we as sterilisation of food has killed all naturally occurring bacteria in food, both good and bad. As a consequence of this, humans are now consuming those chemicals instead bacteria – chemicals which selectively reduce the diversity and volume of beneficial bacteria that live in our gut and regulate essential processes such as nutrient assimilation, synthesis, blood sugar regulation, metabolism and immune activity.

Bacteria themselves are living organisms and as such their growth, diet and life will dictate their quality and consequently their ultimate success as a population in our gut. Just as plants need soil, water and light to grow, so too do beneficial bacteria have health needs. When using bacteria as a health tool, the desired goal is that the beneficial bacteria will reach the intestinal tract, grow and thrive. By doing so, the beneficial bacteria should outnumber the pathogenic bacteria and start generating health benefits for the host. It is for this reason that the Really Healthy Company’s Micromax cultivates its bacteria on a vibrant, colourful diet of wild-harvested herbs and organic molasses: to ensure that their genomic diversity and the subsequent constitution is vital and strong  - strong enough to facilitate its journey from the bottle, through digestion and into gut flora where it needs to live and thrive to generate benefit.

The ideal way of consuming bacteria is when it is alive. Live bacteria are much more likely to survive digestion, as they are at their strongest when they are alive. This is possibly why the popular Korean food Kimchi generates such beneficial effects, and why we seek the mother in Apple Cider vinegar. The bacteria we consume in living products has not had to survive the process of being extracted from its natural environment and life source, frozen, dried, encapsulated and processed and it does not have to live for long periods of time outside of its natural environment. Micromax follows the same principle: it is a living food in liquid form - live bacteria, in its natural environment, taken by mouth directly into the digestive system.

To give your gut bacteria a head start, be sure to eat a vibrant, colourful diet and avoid chemicals and pesticides in your foods. When using bacteria products, start gently and build up your tolerance level: and of course, should you need any advice contact us here at the Really Healthy Company for a free 10-minute consult on gut health.