How can shiitake mushrooms boost the immune system?

Shiitake mushrooms are packed with multiple health benefits, many of which aid the immune system. 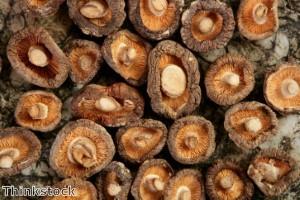 Shiitake mushrooms are an edible fungus native to Asia and are the second most commonly cultivated in the world.

Animal-based studies have discovered antitumour, cholesterol-lowering and virus-inhibiting effects contained within the compounds in the food. However, research in humans is still ongoing.

Shiitake mushrooms have also been found to boost the body's immune system and have been linked with fighting the development and progression of cancer, AIDs, heart disease and hepatitis.

A compound called lentinan is believed to stop or slow the growth of tumours, while activated 1.3-beta glucan is said to lessen the side effects associated with cancer treatments.

In laboratory studies, this polysaccharide appeared to slow the growth of cancer in some cell cultures and more human clinical trials are currently underway to further explore its benefits.

Meanwhile, eritadenine is thought to lower cholesterol by blocking how it is absorbed into the bloodstream.

Many researchers and scientists recommend extracting the compounds within shiitake mushrooms, taking them in the form of a supplement.

BioBran MGN-3 is one of the most effective food supplements available for maintaining a strong and healthy immune system, as it uses rice bran and enzymes from shiitake mushrooms.

This unique blend of hemicellulose nutrients, such as arabinoxylan, as well as other polysaccharides and hemicelluloses compounds, makes it significantly more effective than other immune system supplements.

It has also been backed by medical professionals, with M Ghoneum, a senior professor of immunology at Drew University in the US, stating that BioBran MGN- 3 is the most promising immune complex he has examined.

The recommended intake is 500mg per day with meals. However, those in need of optimum system support can take three grams per day for eight weeks, then one gram per day thereafter.

It is available in both a powder sachet and tablet packet, depending on the individual and their requirements.