Fruit and veg 'good for mood'

Eating seven or eight portions of fruit and vegetables each day could be good for people's emotional wellbeing. 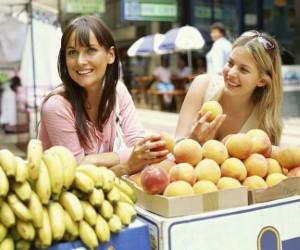 People who are feeling blue may benefit from increasing their intake of fruit and vegetables, a new study has shown.

Currently, we are advised to eat at least five daily portions of different fruits and vegetables to ensure we get a range of nutrients.

The latest research from the University of Otago in New Zealand suggests that increasing this amount by a couple of portions could have even greater benefits for people's emotional wellbeing.

The research team assessed 281 people, with an average age of 20 years, over 21 consecutive days.

During that time, participants completed a daily diary with information on their dietary habits and their mood.

Additional analysis revealed that eating fruits and vegetables predicted improvements in positive mood the next day, showing that good emotional wellbeing was likely to be a consequence of this dietary pattern, rather than the other way around.

Dr Tamlin Conner, whose findings are published in the British Journal of Health Psychology, said: "After further analysis we demonstrated that young people would need to consume approximately seven to eight total servings of fruits and vegetables per day to notice a meaningful positive change.

"One serving of fruit or vegetables is approximately the size that could fit in your palm, or half a cup."

Dr Tamlin added that this can be achieved "by making half your plate at each meal vegetables and snacking on whole fruit like apples".

A healthy diet is something that people with mood disorders should definitely try to adopt in order to improve their outlook.

In addition, they may benefit from trying a greenfood supplement such as Klamath Blue Green Algae, which contains highly absorbable vitamins, minerals and other nutrients.

One of the many reported health benefits of this organic superfood is that it may help those with depressive symptoms, thanks to its high content of phenylethylamine (PEA), a natural endogenous amphetamine that acts as a 'feel good' molecule and is nearly 100 per cent absorbed by the body.