Elderly 'should learn new skills' to keep their mind ticking over

A new study has suggested that learning mentally stimulating new skills could be good for the mental health of the elderly. 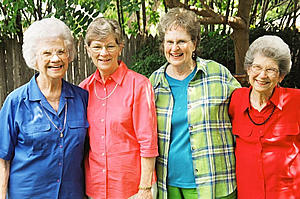 Growing old - and the health implications that may come with it - is certainly inevitable. However, there are certain things that individuals can do to help safeguard their health long into their retirement years.

Now, a new study published in Psychological Science has suggested that more elderly members of the population should be keeping their minds sharp by learning a mentally demanding new skill - for example, photography.

This, it says, is the only sort of activity that will improve cognitive function, claiming that listening to music and doing word puzzles won't make all that much of a difference.

The results were drawn from data from 221 adults aged 60 to 90 who were asked to carry out a new activity for 15 hours every week for three months. Some were asked to do an arguably more demanding skill - like sewing or photography - while the others carried out more mundane activities, like crosswords.

"When you are inside your comfort zone you may be outside of the enhancement zone," the expert added, suggesting that it may not be enough for older members of the population to sit down and do a Sudoku a couple of times a week.

The findings showed that those who had carried out the former type of activity revealed improved memory scores than the latter control group of adults, with the researchers hoping to carry out follow-up studies both one year and five years down the line in order to see if the effects are long-term.

With the number of older members of the population continuing to rise as people live longer and advanced medicine defeats more and more illnesses, this research could come to be extremely important, as Dr Park confirms.

"This is speculation, but what if challenging mental activity slows the rate at which the brain ages? Every year that you save could be an added year of high quality life and independence."

"Our society today has a higher proportion of older adults than ever before. In order to remain vibrant and productive, it is critical that our citizens maintain cognitive health well into older age."

One way of safeguarding cognitive health could be to take a healthfood supplement whose aim is to give the brain a boost. KBG Algae - available for purchase either online or over the phone from the Really Healthy Company - is one such complex and an organic nutrient-dense superfood that is packed with essential vitamins and minerals. In this way, it could give some individuals' memory and brain function a helping hand, as well as enhance their overall health.

Further research published earlier this year suggested that joining the popular social networking site Facebook could also help to give the minds of senior citizens a boost.

The preliminary findings from the University of Arizona showed that elderly adults who learnt to use the site performed better in tasks which required them to continuously monitor and update the contents of their working memory.