Patrick Kingsley is a retired medical doctor who, during the last 25 years of his UK medical practice which saw him treated over 9000 patients, did not prescribe a single drug and yet achieved astonishing success even with many of those with very poor prognoses. Nancy Silverstein reports.

IN THE USA, we had a television show called Marcus Welby MD. Marcus Welby was your local, friendly medical doctor. He was wise and experienced. He even did house calls. Dr. Welby managed in every episode to get to the root of a problem that concerned his patient's health. He was in fact, everyone's hero. 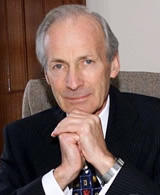 Here in the UK there is a doctor that often reminds me of Dr. Marcus Welby. He is retired now yet rarely resists the opportunity to share his knowledge and still often picks up the phone in what was his surgery. Dr Patrick Kingsley qualified from St Bartholomew's Hospital, London, in 1965 and spent the next few years in post graduate training at the Queen Elizabeth Hospital Barbados, West Indies. In the UK he ran his own private practice in Nutritional and Environmental Medicine and retired in October 2006.

During his time practicing medicine he was consulted by over 9000 patients with multiple sclerosis, thousands with cancer and a whole range of other conditions. He did not prescribe a single drug in 25 years of his UK medical practice.

As a student, he told me he was hungry to treat the patients. Anatomy and Physiology had become dry and impersonal. And the medical protocol was to teach med students to either suppress their patient's symptoms with drugs or remove the problem or offending organ surgically. No one ever talked about returning the patient back to normal. No one even asked why the condition had developed in the first place. And he, being our hero in this story, began to ask why no one was ever asking those kinds of questions? His approach began as basic detective work in attempting to identify the patients underlying problem and he treated nutritional deficiencies rather than suppress the symptoms of his patients.

Perhaps he was fortunate to practise medicine in Barbados for there were only 7 junior doctors plus 2 consultants for 250,000 people. That was very hard, very demanding and yet very very exciting. He had the good fortune to work under an exciting surgeon and excellent physician by the name of Dr. Sir Aubrey Leacock who allowed him to use his common sense along with his newly acquired medical knowledge and enthusiasm. He was not coerced into doing things the way a 'proper' doctor was told to practise medicine.

Often he would be on duty in casualty for 4 days before he would be able to have 1 night's sleep. He recounts his first night in casualty at around 2.00am when a wizened little lady came into the department, together with what appeared to be her daughters, grand-daughters and great-granddaughters. She was complaining of tummy ache.

He asked her the usual questions about where it hurt, how long had it been hurting, had she been sick, could she put a finger on where the pain was worst. Yet all she ever answered was "De belly she hurt." He told me he remembers thinking at the time "they don't teach you how to deal with this sort of thing in Medical School". So he decided to examine her. He pulled the sheet from her tummy and there was a head being delivered. Turns out she was only 22 years old, pregnant and delivering at the time.

He saw nearly 100 ectopic pregnancies in one year. All too often there were six pints of congealed blood in the woman's abdomen when he would open her up and they didn't have blood transfusion services at the time. What he recounts they did instead was infuse neat coconut juice intravenously as the juice is apparently isotonic and sterile. Thanks to this kind of thinking all those women survived.

At the time, he also saw a number of cases of Weil's disease, which usually attacks the liver yet tended to attack the patients' kidneys as well. They had no dialysis system available but they had heard of peritoneal dialysis, sent for some kits from Canada, read the instructions and got on with it. They also all survived.

Back in the UK, he continued to do what doctors do, but, after a stint in single-handed rural dispensing general practice, he set up his own private practice in 1981, from which time he did not ever prescribe a single drug that he can recall. He did not need to. This was the kind of medicine he had been wanting to practice all along.

So now Dr. Patrick Kingsley is retired. He has written books including 'The Medical Detective- Memoirs of a Most Unusual Doctor'.

As more medical students qualify each year, it would be encouraging if they each had a chance to apprentice with a man like Dr. Kingsley or Marcus Welby MD Common Sense, ethics and knowledge, these days in medicine appear to be uncommon.