People with osteoarthritis of the knee may benefit from taking a high-quality curcumin complex. 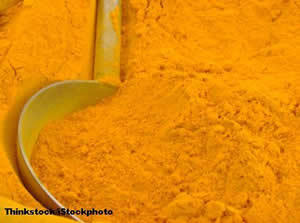 People with persistent joint pain that fails to respond to conventional treatment may want to consider using a natural supplement such as curcumin.

Extracted from the popular Indian spice turmeric, curcumin is included in many different curry recipes but is increasingly being taken for its reported health benefits as well.

One such use is as a natural painkiller and anti-inflammatory for people with osteoarthritis of the knee, a degenerative joint disease that affects hundreds of thousands of Britons from midlife onwards.

There is plenty of clinical research in support of this use of curcumin, such as a study published in the Journal of Alternative and Complementary Medicine in 2009, which found the herbal remedy to be as effective as ibuprofen at improving pain while walking.

The study, which involved more than 100 patients with knee osteoarthritis, also found curcumin to be safe for human use.

Meanwhile, a separate study published in 2010 in the journal Panminerva Medica compared the effectiveness of a special turmeric formulation with that of standard care.

Researchers found that patients who used the natural remedy typically benefited from a 58 per cent decrease in overall pain and stiffness, compared with those who received standard treatment, as well as a 16-fold reduction in levels of C-reactive protein, an important marker of inflammation.

Mark Blumenthal, executive director of the American Botanical Council, said at the time that curcumin has long been known to have anti-inflammatory and pain-relieving properties.

He added that the trial was "another important step towards validating the curcumin in turmeric as an increasingly popular herbal dietary supplement".

According to the charity Arthritis Research UK, herbal remedies are generally safe, but can sometimes interact with prescribed medication.

For this reason, it is important that anyone who plans to use curcumin on a regular basis discusses their intentions with their doctor.

One of the other considerations when using curcumin is that it is not readily absorbed by the body.

It also contains the enzymes bromelain and quercetin for added anti-inflammatory support as well as a proprietary blend of Klamath Blue Green Algae, enzymes and black pepper extract to further enhance absorption.